A fun night and even a visit from Father Christmas 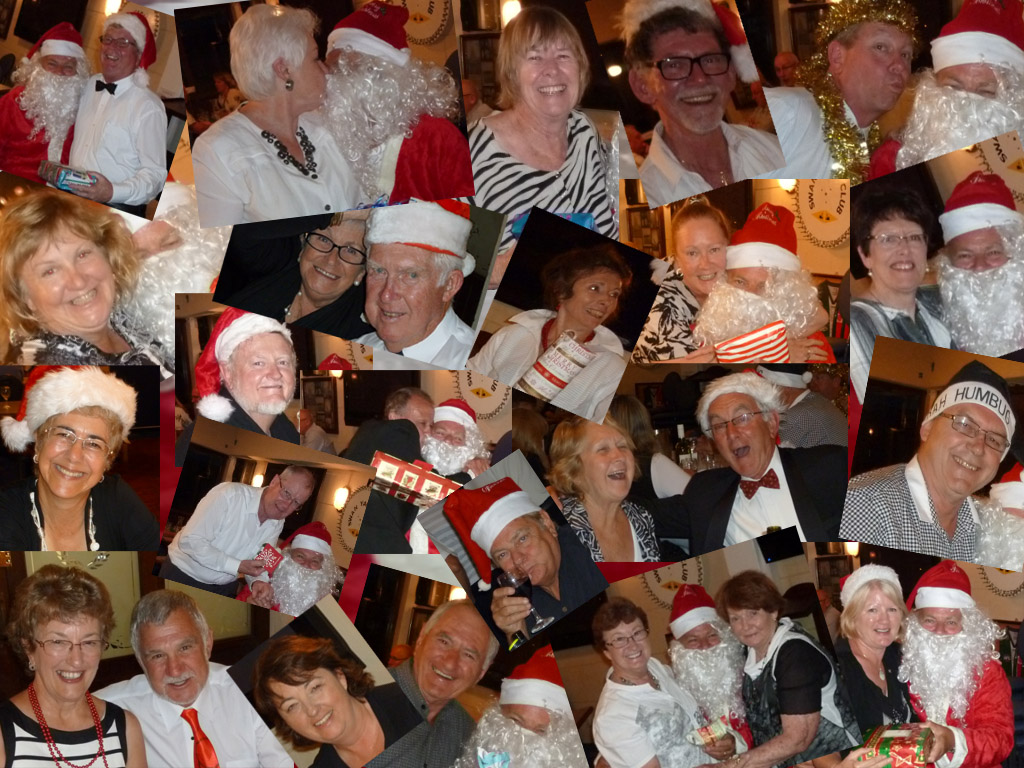 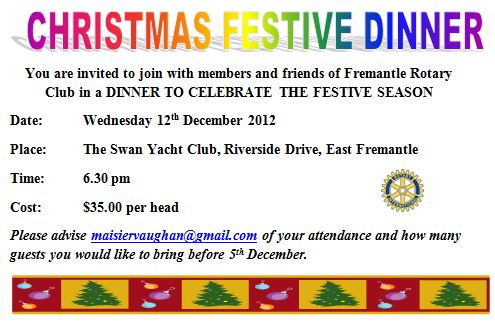 On Sunday the 11th of November the Suncorp Fremantle Fun Run was Held .For this event the Rotary of Fremantle partnered with friends and family of the LEARN Foundation for Autism 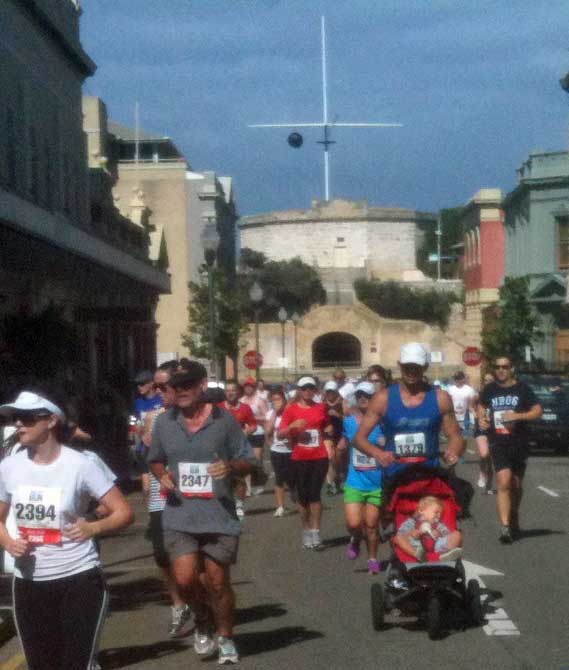 to take part in the Suncorp Bank Fremantle Fun Run on November 11, 2012, with all funds going  to LEARN.  The primary fund raising was done through the Hero Website http://alturl.com/oz3ou, which given the short time frames , achieved an excellent result with the Learn foundation for Autism team raising over $6000 which also was the top fund raiser for this event.

Additionally some 50 Fremantle Rotarians and friends and family volunteered on the day for which Rotary will be paid, these funds will also  be donated to the LEARN Foundation for Autism.

Well done George Booth who was the driving force behind this successful partnership.  And also congratulations to LEARN on what has been a great fund raising effort. 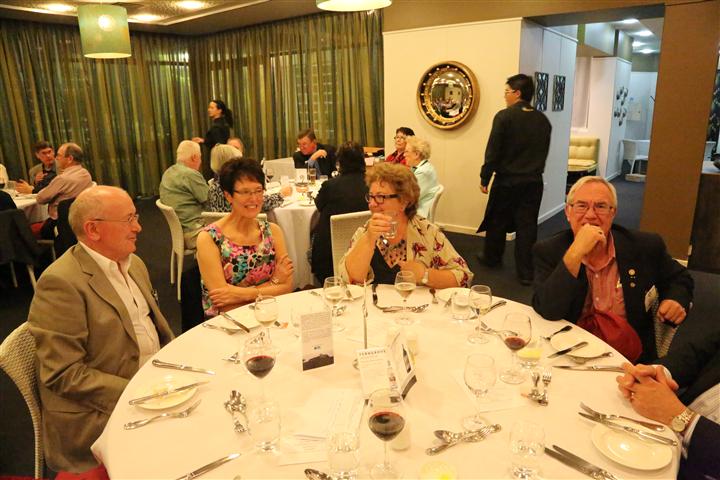 Rotary Club of Fremantle had their Dinner meeting at  “Quinlan’s Training Restaurant” which is a real-life venue at the Fremantle Challenger Institute of Technology where commercial cookery students prepare meals while the hospitality students serve the general public drinks and meals.

This is a great way for students to get real world experience.  It was a great evening for the club who enjoyed fantastic food and service, and easily outshines many local restaurants.    Thanks very much to all the staff and students who made this a great night.

October 2012 Newsletter now available.  Click  here  for all the latest.

Rotary International has made a new funding commitment of US$75 million over three years to the Global Polio Eradication Initiative (GPEI). 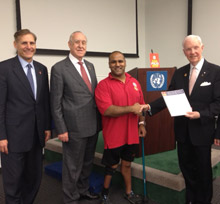 Rotary, which has already contributed nearly $1.2 billion to the GPEI, announced the commitment at a 27 September high-level side event on polio eradication, convened by United Nations Secretary-General Ban Ki-moon during the United Nations General Assembly in New York.

The inaugural Suncorp Bank Fremantle Fun Run is on Sunday the 11th of November 2012.  There is a 4km walk or 10km run, full details at www.fremantlefunrun.com.au.

Whether you’re doing  the run or walk, why not  consider sponsoring  the Learn Foundation for Autism.  This Not for Profit Organisation based in East Fremantle, provides much needed therapy services to young children with autism and developmental delays.  So please sponsor/donate at http://alturl.com/oz3ou.  For more information please call LEARN on 9438 3800 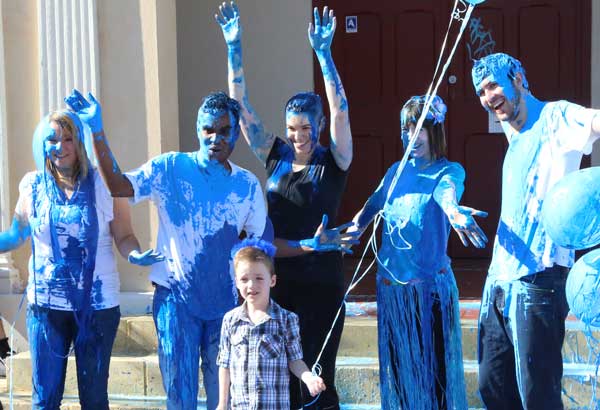 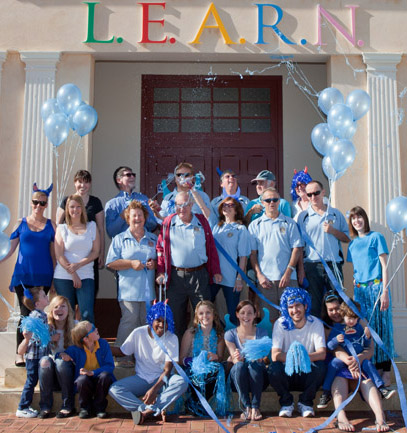 Fremantle Rotary is holding a sausage sizzle on Saturday 22nd September at Bunnings O’Connor – Cnr South and Yarrick Sts, 8.00 am to 4.00pm.

If your in the neighbourhood, please drop by purchase a sausage to support our club. Let your family and friends know too!

Many months ago the Rotary Club of Fremantle presented many microscopes to a number of schools in the Fremantle area.This type of community project is just one of the many that the dedicated bunch from Fremantle Rotary are thrilled to be part of. It is also wonderful to see that the efforts are appreciated. We recently received a pile of cards from one of the schools. Below is a selection. 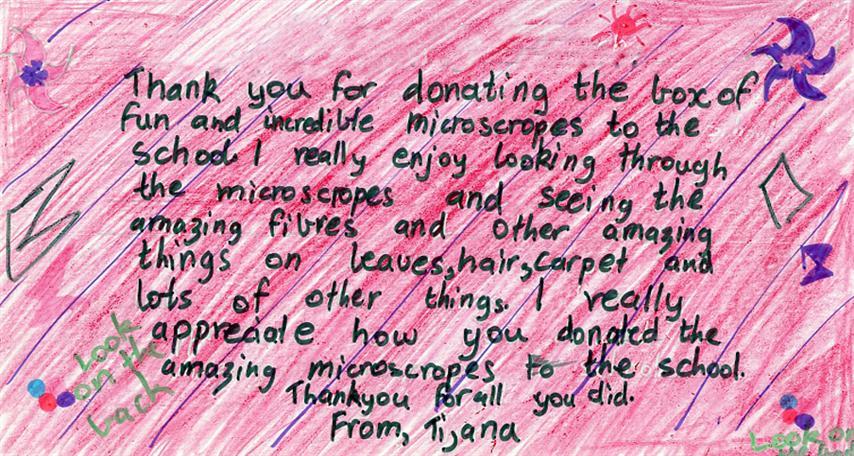 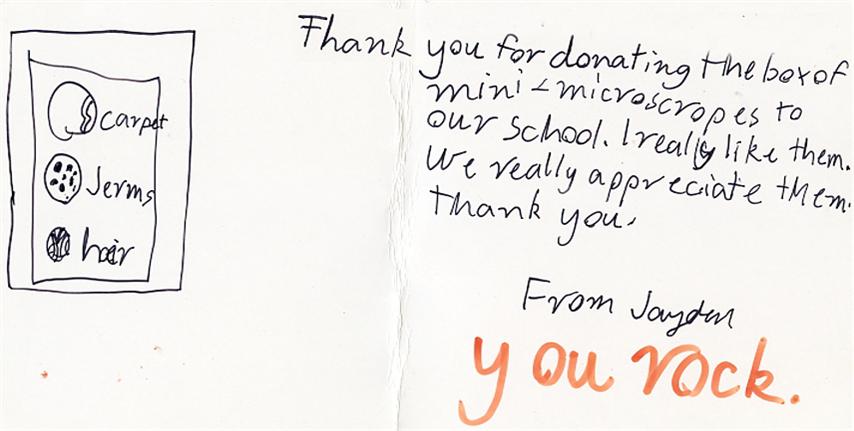 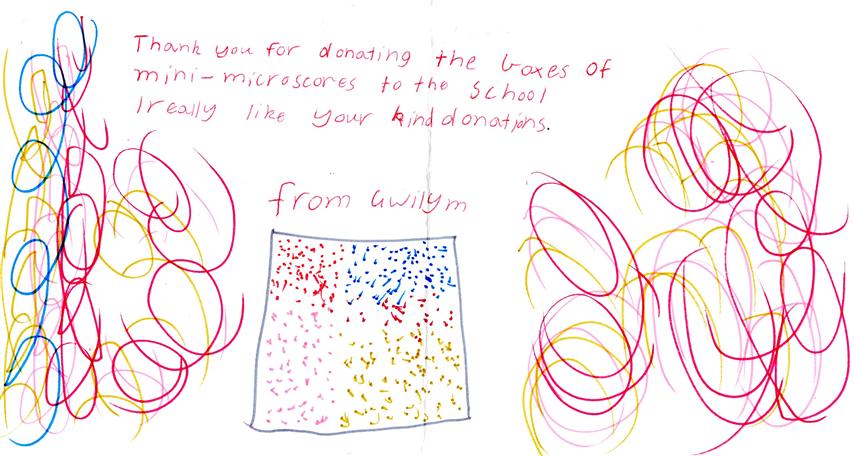 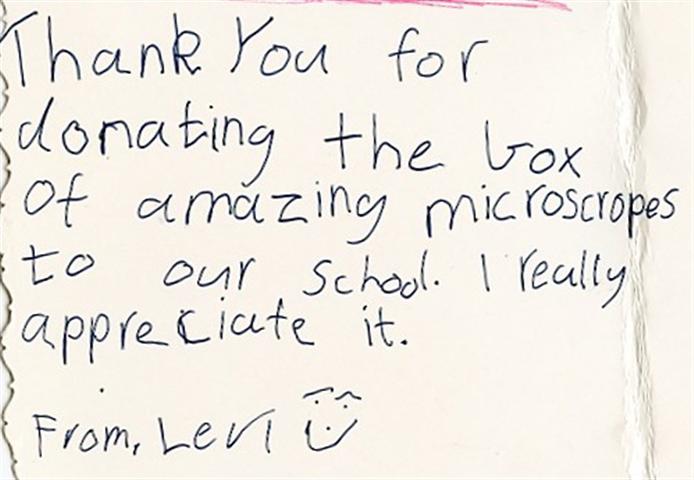 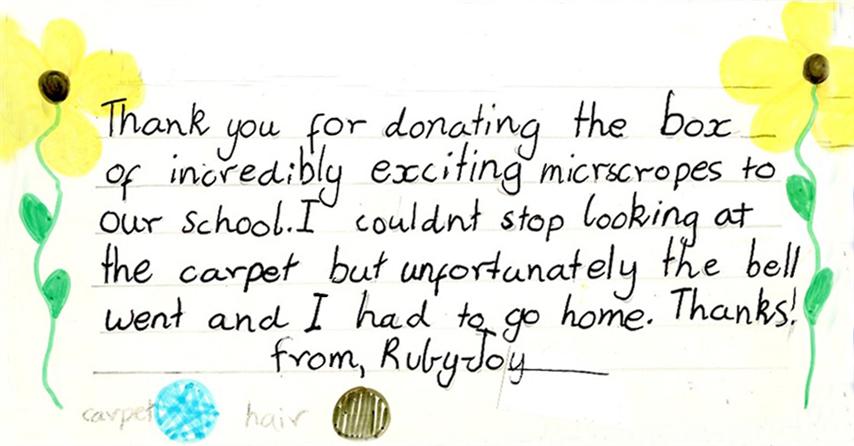 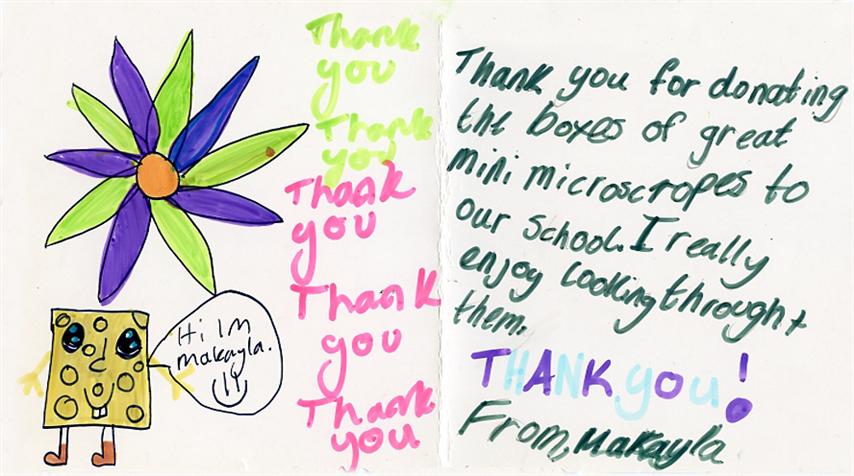 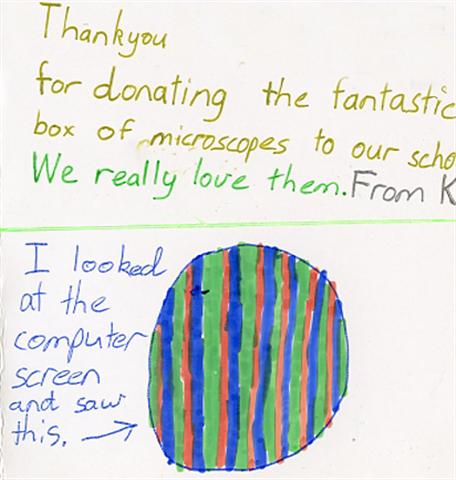 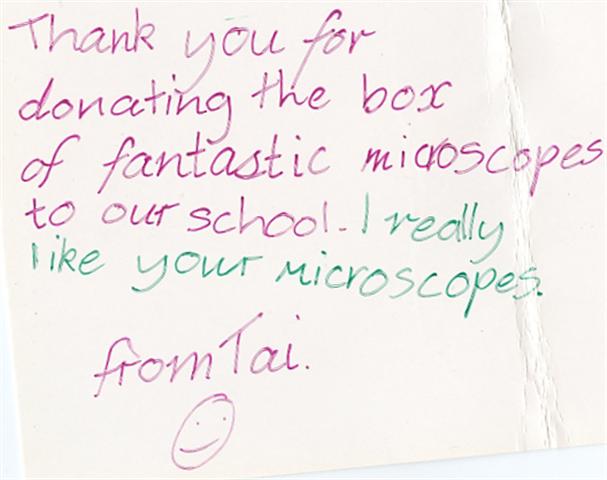 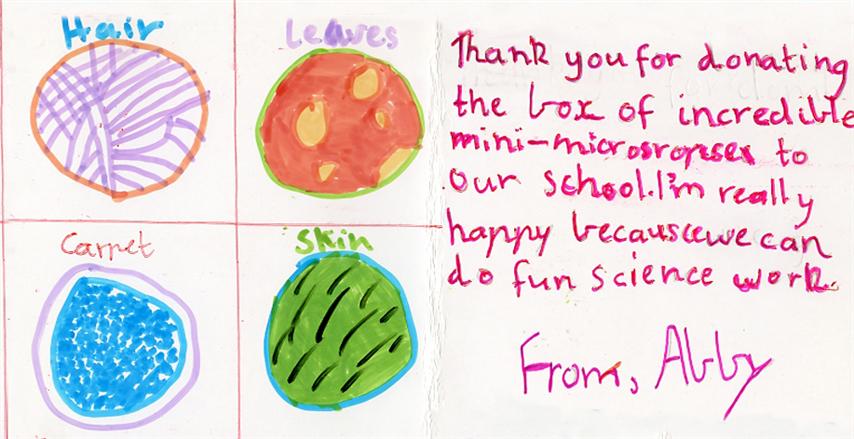 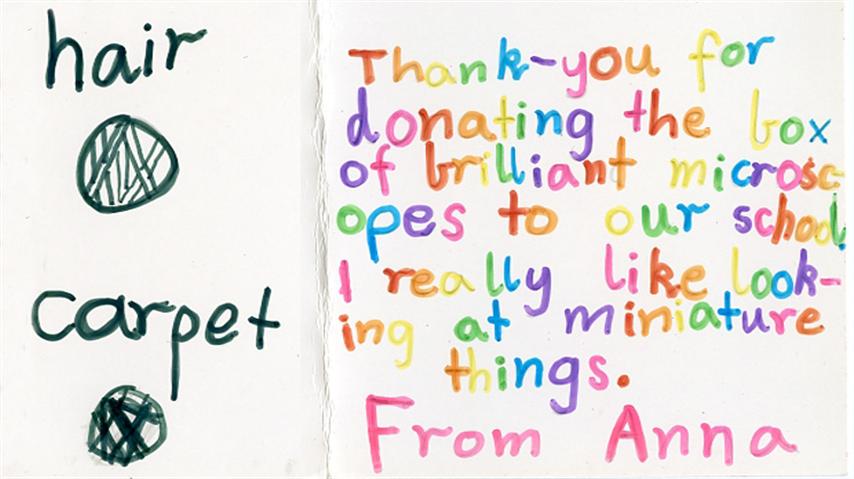 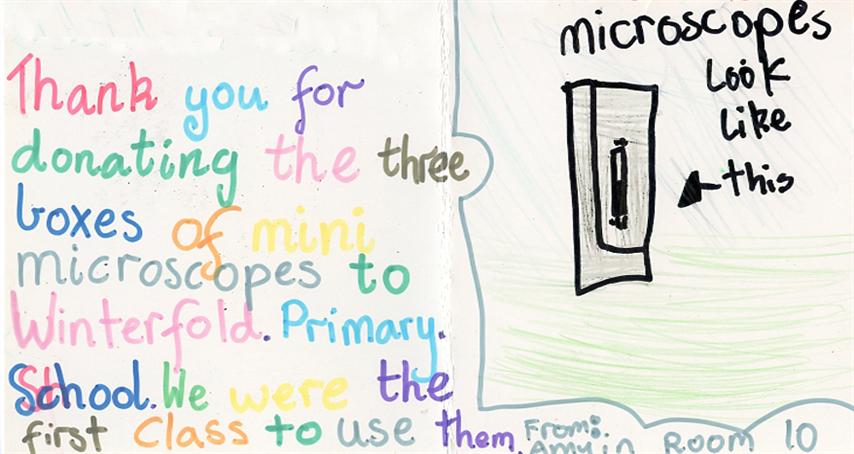 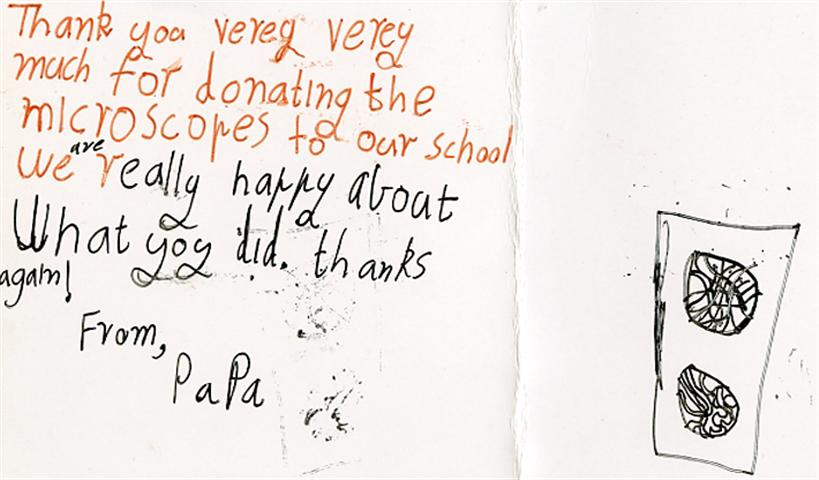 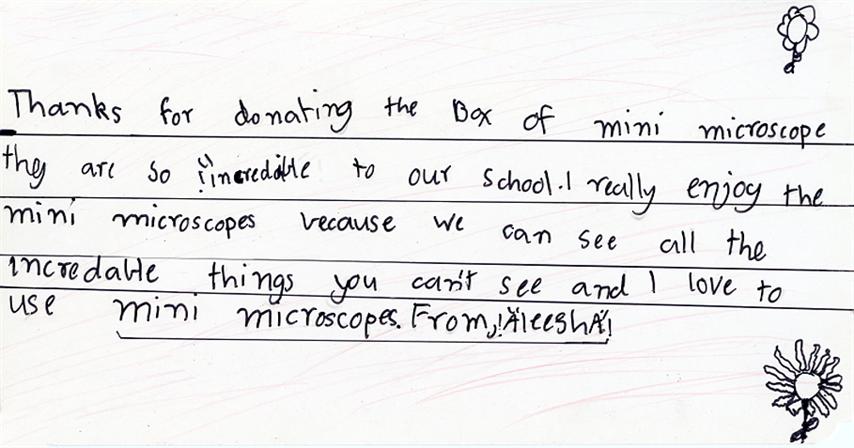 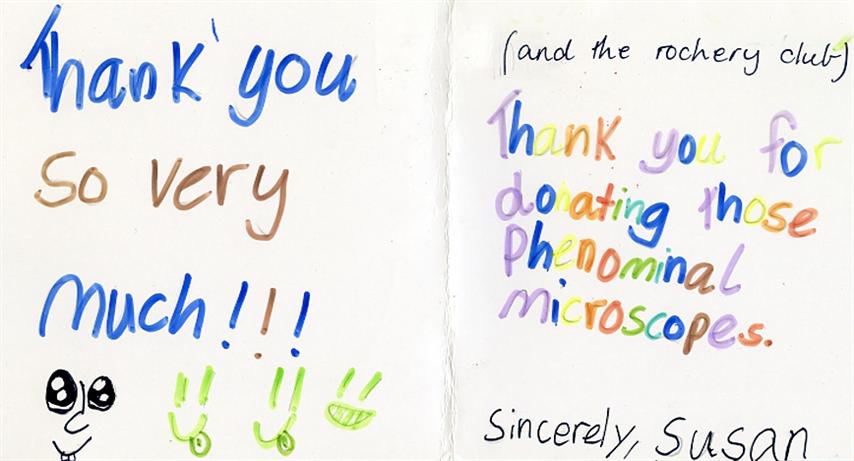 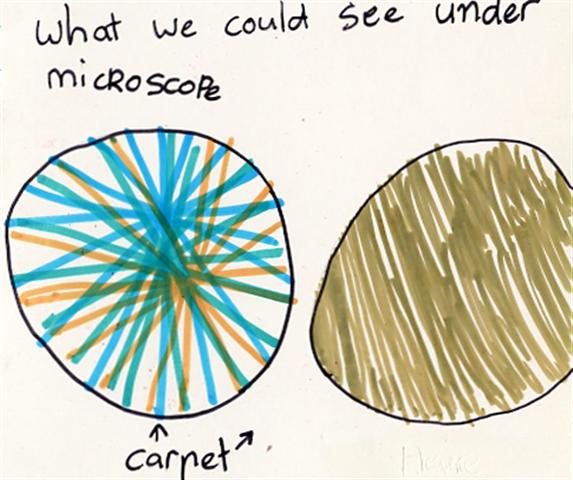 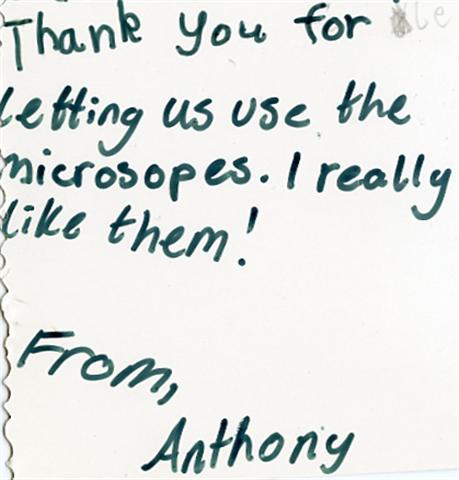 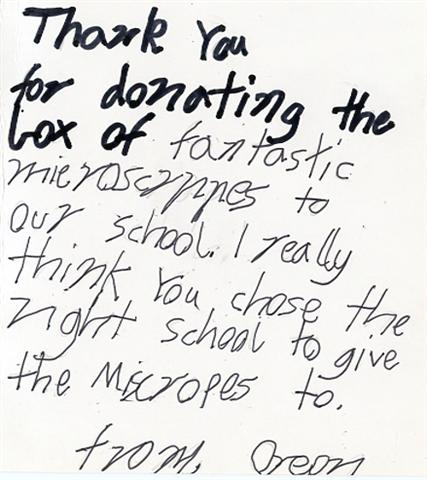 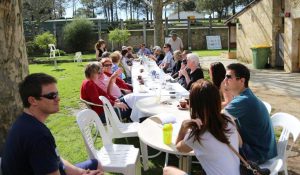 On Sunday September the 9th the new season was welcomed in by Freo Rotary in fine style by having a breakfast at the Fremantle Arts Centre. A long table was set up in the grounds and everyone really appreciated the surroundings.  We all kept saying that we should come more often.  Weather was very spring like, almost too hot and we all had to break out our dark glasses and hats for the better prepared.  Thanks to Maisie for organizing the event and making such a fun start to the season.

Some members went  on and joined the artists at Atwell gallery for a cuppa and to view  the Hidden Depth Exhibition in the afternoon.

“We wanted to celebrate the achievements of these amazing athletes and Rotary’s hard work towards polio eradication,” says Judith A. Diment, PolioPlus national advocacy adviser for the UK and a member of the Rotary Club of Windsor St. George, England. “Both groups have persevered through great odds to be where we’re at today.”

Rotary International, in association with UNICEF, the Bill & Melinda Gates Foundation, the British Pakistan Foundation, and the Global Poverty Project, sponsored the garden party in London attended by more than 100 people, including five Paralympic athletes, three of whom are polio survivors. The event raised thousands of dollars for PolioPlus and the Pakistani Paralympic Committee and advocated for a polio-free world. Wajid Shamsul Hasan, the High Commissioner of Pakistan to the United Kingdom, praised Rotary’s efforts to eradicate polio in Pakistan and spoke about his government’s commitment to step up resources to rid his country of the disease

August 2012 Newsletter now available here. You can subscribe to our Monthly Newsletter here.

On the  1st of August we had our Christmas in July in August.  So close to a Christmas in July, but not quite. It was a fun night and special thanks to Maisie who made everything very Chrismas like.  In keeping with the theme we had photos from the 2011  Christmas Party revolving around in a slides show.

Whilst it was a fun night we had a serious aim.

It was the launch of  Operation Christmas Child for our club.  Operation Christmas Child is a unique project of Samaritan’s Purse that brings joy and hope to children in desperate situations around the world through gift-filled shoe boxes. We had Julie Quelfi from Samaritans visiting us with aan update and inspiring us to get to it again. Last year was a huge success. so  start collecting your shoe boxes as we only have until October to complete the collection.

Pakistan is making progress against polio in the face of challenging, sometimes tragic circumstances, including the recent killing of a local community polio immunization worker and wounding of two others — a staff member of the World Health Organization and an international consultant — in Karachi, Sindh. In addition, leaders in a small region of the northern part of the country have banned polio vaccinations.

WHO issued a statement expressing condolences to the family of the worker who died, adding, “The partners of the Global Polio Eradication Initiative remain committed to supporting the government of Pakistan and the people of Pakistan in their efforts to eradicate this devastating disease.”

Pakistan, Afghanistan, and Nigeria are the only remaining polio-endemic countries in the world. The incidence of polio in Pakistan has dropped by more than 60 percent this year, with 23 cases reported as of 12 July, compared with 59 cases during the same period last year.

In support of Pakistan’s polio eradication efforts, Rotary recently installed two mobile clinics at checkpoints between Karachi and other parts of Sindh. The clinics are staffed 24 hours a day and supervised by WHO. Rotary also provided 45,000 vaccine carriers to the government in April.

After 25 years of hard work, Rotary and its partners are on the brink of eradicating this tenacious disease, but a strong push is needed now to root it out once and for all. It is a window of opportunity of historic proportions.  Reaching the ultimate goal of a polio-free world presents ongoing challenges, not the least of which is a US$535 million funding gap through 2012. Of course, Rotary alone can’t fill this gap, but continued Rotarian advocacy for government support can help enormously. Fremantle Rotary continues to support this initiative through its ongoing support of the Rotary Foundation.

RecLink Australia Inc is a charitable organisation whose mission is to provide sporting, social and arts activities to enhance the lives of people experiencing disadvantage.
Targeting some of the communities most vulnerable and isolated people – those who experience mental illness, disability, homelessness, substance abuse issues, addictions, and social and economic hardship – Reclink has facilitated cooperative partnerships with a network of over 200 member agencies Nationally who are also committed to encouraging participation by a population group under-represented in sport and arts programs.

Part of thier program was the Western Australian Reclink Football Finals held on the 02 Aug 2012.  Recognising the great work Reclink does, the Rotary Club of Fremantle was there lending a hand to help make the day the success it was.  Fremantle Rotary helped by providing lunch in the form of a sausage sizzle which was much appreciated by all. It was a great day, much enjoyed by the participants. 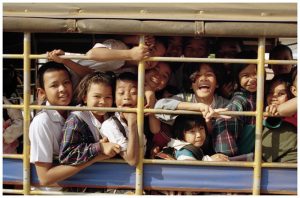 The Fremantle Rotary  with the Rotary Club of Bali Ubud have set up the East Bali Bunatan Education Project to give children a chance at education that they would not otherwise have.  This was achieved by arranging for 24 poor children from the remote Bunatan village of Batukesini to attend the nearest Middle School in a larger village 15 Kms away.

24 primary school graduates ( grade 6 ) were identified who would continue to middle school, if  they had transportation to the middle school. Through the use of a pickup truck, reinforced at the back with metal railings, up to 50 children can stand and hold on for the 30 to 40 minute ride each way. Some of the children on board pay their own way from family income of fishermen who own their own boat. Others less fortunate, are helpers or subsistance farmers with limited income. The children graduated in June 2012.  Additionally 4 new high school students were identified and then helped with funding of  80 dollars each to enter as freshmen.

This simple project has made a huge difference.  The continuation from primary school to middle school has been improved from below 50 percent to more than 70 percent.  The principal of the primary school, Mr. Ketut is extremely pleased with this outcome which is more than hoped for.

This project is located on the east side of Bali in the rain shadow of the largest mountain on Bali, Mt. Agung. The climate is either wet or dry with nothing in between. Most years, the dry season lasts 8 months where all vegetation drys to a crisp light brown; in the 4 wet months there is time to grow one crop of corn ( not rice ) to be cooked over a hot fire and served as popcorn , their main staple. This is especially true in the dry season where the ground is parched. Water is a very scarce commodity for either drinking, cooking or washing.